There is a 0.75-mile loop trail that follows old cart roads. A smaller side trail leads to Lovers Lake and two cedar stump seats. The land is restricted as open space by the deed. The telephone poles scattered throughout the property are historic components of the 1900s Marconi ship to shore communications.

The eastern entrance is depicted by the property sign. Trail markers have been installed, but are occasionally vandalized. The trail is mowed once a year to help prevent the growth of poison ivy. As depicted in the topographic features, the trail has some steep hills. Illegal motorbike use has rutted out the trail in some locations.

The meadow located on the eastern property border is currently being restored to native plant species. 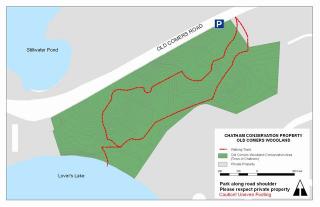