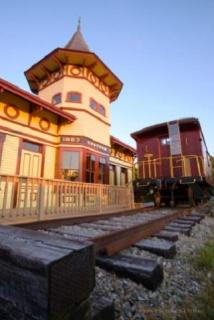 View Most Recent Agendas and Minutes

The Chatham Railroad Museum is contained in the beautifully restored 1887 railroad depot that served Chatham residents and visitors for many years. Featuring an architectural style called Railroad Gothic the depot contains hundreds of exhibits and the New York Central model locomotives in use at the 1939 New York World's Fair. The Museum is child-friendly and includes a 1910 restored caboose available for children to explore. Donations are accepted. Handicapped accessible.

Although the museum building is owned by the Town of Chatham, the museum is managed by the Chatham Railroad Museum Group with many members having backgrounds in the American railroad industry. Members are appointed by the Board of Selectmen and act as trustees, coordinating the 50 volunteers who serve as museum docents during the summer season.

The Chatham Railroad Museum was founded in 1960 following the donation of the vacant depot building and land to the Town of Chatham by Mr. and Mrs. Jacob Cox. At the suggestion of the Chatham Chamber of Commerce, a railroad museum was established in the building under the leadership of Mr. Frank Love, a retired New York Central Railroad executive.

Exhibits include a wide variety of vintage models including those made by Walthers for the 1939 New York World’s Fair and an HO diorama of the Chatham Railroad Yard. The museum building was placed on the National Register of Historic Places in 1978 and during 2009 received local and state grants for a total exterior restoration.

Founded in 1886, the Chatham Railroad Company was chartered to build seven miles of track from the Old Colony Railroad Mainline in Harwich to Chatham along with a yard and two stations. The Honorable Marcellus Eldredge who had made a fortune in the brewery business was President of the company.

The track and stations were completed during 1887, with mail, lumber, grain and coal being shipped in and mail, fish, shellfish and cranberries being shipped out. Four passenger trains a day carried residents and visitors to and from Boston. During 1891, the Chatham Railroad Company served the needs of 22,000 passengers at its two stations with baggage and express service to the hotels and inns springing up in Chatham and South Chatham.